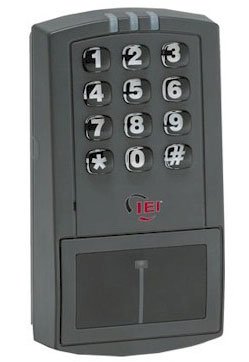 Security is a vital part of any industry that deals with sensitive products or information, and one of the most important aspects of security is physical access control. For most implementations, access control starts at the door. In an ideal situation, a door will provide immediate access for authorized personnel while preventing access to unauthorized personnel, and do so in a completely unobtrusive and efficient fashion.

The ProxPad Keyless Door Entry Access Control System provides both security and peace of mind in an affordable and convenient package. Best of all, this affordability applies to not just the initial setup cost, but also total cost of ownership. The big benefit in cost of ownership lies in the combination of the control that keyless access provides, and the fact that the doors default to the locked state.

The system relies on the low voltage ProxPad card reader, running on a dedicated power circuit. Each user touches their programmable card to the sensor pad to gain admittance to the cleanroom or other secure area. An LED light turns green for authorized cards, red for unauthorized cards, and yellow to indicate programming errors that require administrator intervention.

Once the door receives the command to open, it remains open for 5 seconds before closing automatically. If the door is propped open to move something large into the cleanroom, the user has 30 seconds to close it before an alert sounds. There is also a 10-second alert if a door is forced open. This combination of features offers the ideal mix of both access control and monitoring. Those concerned about power outages can add an optional battery backup to power the doors and access control system.

The system is available with either sliding or swinging hard doors, both electronically controlled. The sliding doors rely on a magnetic closure, while the swinging doors use a bolt. In all cases the default system state is a closed and locked door. With a sliding door, the system briefly interrupts the magnetic field holding the doors closed, allowing the user to slide them open. For swinging doors, the bolt is electronically released by the activation of an electronic field, and drops back into place once the field shuts off.

A single system can handle up to 2,000 individual users each with his/her own access permission. This enables the administrator to enable or disable user cards from the control panel rather than having to track individual keys, which greatly simplifies the problem of managing access.

A standard “mushroom” palm switch handles the exit. Users inside the cleanroom or other secure area can simply push the over-sized switch to exit within the allotted time. Those who want a greater degree of control can install a second ProxPad inside the secure area so that both entry and exit require the use of a ProxCard.

Whatever your security needs might be, whether for a cleanroom or other secure space, going with a keyless system is a convenient and affordable way to manage access control.