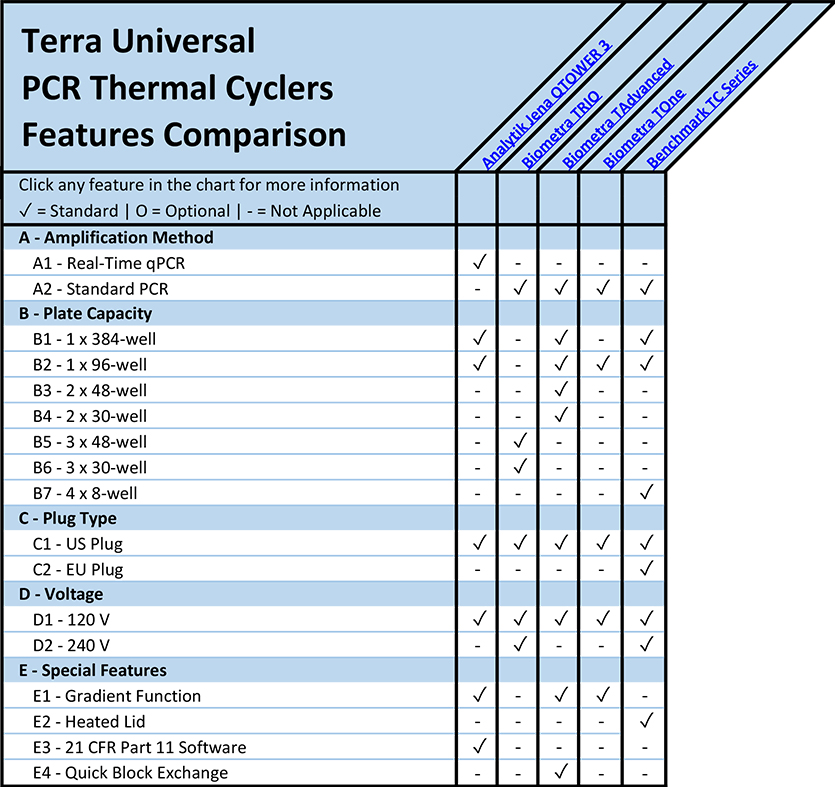 What is a PCR Thermal Cycler?

Standard PCR thermal cyclers amplify the target DNA or RNA sequence but do not include the software (or detector) to measure the rate of amplification in real-time.

What is the difference between a real-time PCR system and a standard PCR system?

Standard PCR systems include a sample block (compatible with microplates, microtubes, or PCR strips), heating and cooling elements, and an onboard controller. The heat is transferred between the element and the sample block (containing the specimens) through the Peltier effect, ensuring fast ramping and cooling rates and tight temperature tolerances.

Real-time PCR system features also include a sample block, heating/cooling elements and a controller, as well as a light source (often a Tungsten lamp), light filter, and light detector. The real-time PCR thermal cycler’s on-board software includes additional functionality to chart the results of the reactions as they occur, assigning amplification curves as Ct values to each positive specimen.

What is the standard protocol for polymerase chain reaction (PCR) techniques?

The standard PCR protocol consists of an initial step followed by a precise, 2-step temperature sequence, repeated for 40 cycles. The first step, or denaturation step, involves heating the sample to 95°C for 3 minutes, to separate, or denature, the double-stranded target DNA into single strands. The second step, called the annealing step, consists of cooling the sample to 60°C, the ideal temperature for the primers and DNA polymerase to bind, or anneal, to the target sequence. The third step, or the extension step, involves heating the sample to 72°C, to allow the DNA polymerase to form a new complementary strand of DNA, using the dNTPs (or di-nucleotide tri-phosphates). The annealing and extension steps are repeated for 39 additional cycles to form millions of copies of the target DNA sequence.

The real-time PCR protocol mirrors the standard PCR protocol with one exception: the annealing step also involves the binding of the fluorescent probe, or reporter molecule, to the target DNA strand. As the DNA polymerase forms a new complementary strand during the extension step, the probe emits light at a specified wavelength. The light is measured by the detector as the reaction proceeds through the 40-cycle protocol, giving the researcher an on-demand analysis of the amplification rate within each sample. With some variance due to protocol differences, normal PCR runs last between 90 and 100 minutes.

The on-board software installed on a standard PCR thermal cycler, such as Benchmark’s TC Series, includes an output of the reaction protocol, a status indicator defining the current step of the reaction, and an estimated completion time. More advanced standard thermal cyclers include user-defined protocols, password protections, and temperature optimization wizards.

Standard and real-time PCR are used in a wide variety of applications, including forensics, environmental science, clinical diagnostics (such as COVID testing), cloning, genotyping, mutation detection (for cancer screening), and paternity testing.

A - Amplification Method
(back to chart)

In real-time quantitative PCR, the target sequence, or amplicon, is measured as the reaction progresses toward completion, with copy number quantitation after each cycle.

What is the advantage of real-time PCR?

Real-time PCR does not require additional, lengthy end-point detection steps, such as gel electrophoresis, but provides the researcher with a quantitative and qualitative sample analysis in fewer steps than conventional PCR. The process is more costly than standard PCR, but the protocol is less laborious, provides on-demand analysis (for time-sensitive research), and is less prone to cross-contamination.

In standard PCR, or conventional end-point PCR, the DNA target sequence, or amplicon, is detected using end-point analysis, normally accomplished by gel electrophoresis. Conventional PCR provides a qualitative analysis of the sample, but not a quantitative assessment. The process is less costly than real-time PCR, but the protocol is longer, more laborious, and more vulnerable to sample cross-contamination.

B - PCR Thermal Cyclers Plate Capacity
(back to chart)

Gradient PCR is a technique that allows the user to determine the optimal annealing temperature for the primer, and possibly, probe mix within the chosen assay. Gradient thermal cyclers, like Biometra’s TOne, include a single sample block with a heating element installed on one side of the block and a cooling element installed on the opposite side. The heating and cooling elements work in tandem to generate a gradient across the sample block, allowing for positive control samples to amplify under differing annealing conditions. End-point analysis helps to determine which annealing temperature supported the most robust amplification.

Where Can I Buy PCR Thermal Cyclers Online?

Shop lab thermal cyclers online for a variety of pharmaceutical, laboratory, life science research, and analytical environments. Contact a Laboratory-equipment.com specialist through web chat, email, or phone for pricing or a same-day quote.