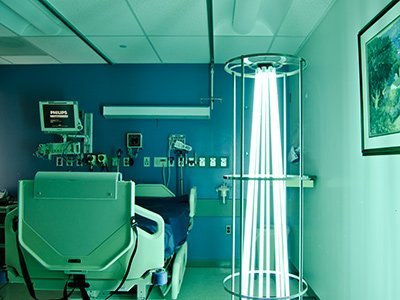 Many manufacturers face the challenge of maintaining sterile products and processes. In most cases, there’s no one-size-fits-all solution. Highly effective sterilization technologies like ethylene oxide gas (EtO) or hydrogen peroxide vapor carry substantial risk and often come at a high cost. Frequent manual wipe-down with IPA or other cleaning agents is much less expensive but introduces difficulties related to operator training and process documentation and consistency. In many cases, the challenge amounts to managing multiple technologies that provide microbial control throughout widely differing processes—while minimizing costly disruptions for bioburden testing or decontamination routines.

Fortunately, ultraviolet sanitizing technology provides a range of safe, cost-effective disinfection measures that simplify this task, whether employed as a stand-alone measure or as part of a broader sterilization program. 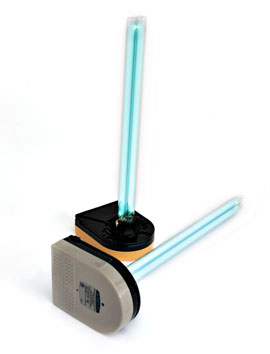 Sanitizing vs. Sterilization: What UVC Does and Doesn’t Do

Ultraviolet C (UVC) radiation is the germicidal range of the ultraviolet spectrum. UVC energy, with wavelengths in the 280 – 100nm range, is removed from sunlight by the earth’s atmosphere, so earth-bound microorganisms have not developed a natural defense against it and are highly susceptible to cellular damage—particularly, disruption of DNA sequencing—as a result of relatively low levels of UVC exposure.

UV Germicidal Irradiation (UVGI) has been studied for over a century, and UVGI effects on common bacteria, viruses and mold spores are well known. Manufacturers of UVC equipment often provide D99 dosages (the duration and intensity of UVGI necessary to a 2-log reduction of all microbes present) for specific pathogens and exposure conditions, making it relatively simple for a manufacturer to select a system for a particular situation. Although UVC lamps may not produce an entirely sterile surface, they can maintain consistently low microbial loads throughout a wide range of operations and eliminate bioburden spikes that could necessitate extensive testing and decontamination measures. 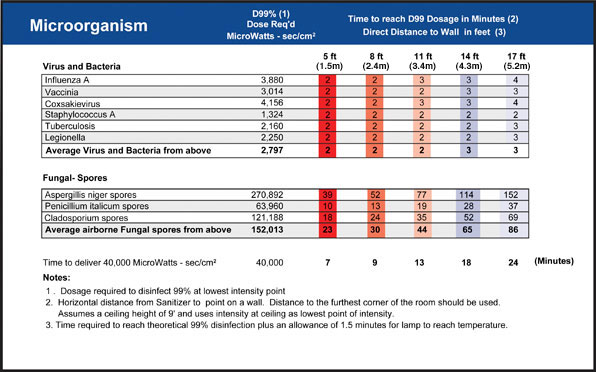 In many situations, a D99 dosage is adequate guarantee of germicidal control (D99.9 and D99.99 levels are also obtainable in many cases). As shown in Figure 1, the D99 “kill rate” is reached in as little as two minutes of exposure for common pathogens like influenza A, tuberculosis and legionella. Even when absolute product sterilization requires additional equipment, use of UVC sanitizers often minimizes the frequency of more disruptive sterilization and testing.

UVC is relatively easy to implement safely in a wide range of situations. Such applications typically fall into two categories: surface disinfection and airflow disinfection.

Surface disinfections entails UVC exposure to wall or chamber surfaces, as well as to surfaces of manufactured samples. As long as surfaces to be disinfected are within the line of sight of the lamp, it is fairly simple to select a system with the proper intensity to provide D99+ dosing with a few minutes of UVC exposure.

Whole room sanitizers provide this germicidal control for walls, ceiling and floor of a lab, cleanroom or other production space. These units include cycle timers that let a user set the unit for operation and then safely leave the room. Because they require only a few minutes to provide a D99 dosage, they can be operated before and after processing shifts to provide a first line of defense against bioburden accumulation.

A range of UVC lamps, is available for standard process enclosures, such as gloveboxes, isolators and hoods. Small enclosure sizes allow effective irradiation with lower-wattage fixtures and shorter cycle times. Because standard glass and many plastics, including acrylic, PVC, and polycarbonate, are effective UVC shields, UVC lamps can be safely incorporated into the systems without risk to the personnel who use them. Laminar flow and exhaust fume hoods, which allow limited exposure of UVC light to the operator’s hands and face, can be fairly simply modified with a pull-down sash and interlock device to preclude exposure during UVC lamp operation. Protective gloves and face shields minimize risk when physical barriers may not be possible.

Airflow sanitizing contributes further to bioburden control in a cleanroom or other air conditioned facility. Because viral particles typically fall in the sub-micron particle size, often below the 0.12-micron diameter pore size used to rate Ultra-Low Particulate Air (ULPA) filters, their transmission is difficult to control even in classified cleanrooms. In most cases, however, special UVC ductwork fixtures can be installed to minimize the bioburden in a cleanroom or other controlled production environment. Even with air moving as fast as 100 feet/minute, a fixture optimized to increase the exposure time will attain D99 dosage for most bacteria and viruses.

The principal limitation of UVC germicidal irradiation is the need for direct exposure. Place a sample too far from the UVC source, or move it out of the direct line of sight, or cut the exposure time too short, and you lose germicidal efficacy.

Extended UVC exposure also degrades some materials over time. Although it has no effect on most construction materials inside a lab or cleanroom, including metals, painted surfaces, and most plastics, UVC prematurely ages many elastomers and paper-based products. Fortunately, these effects can typically be minimized through controlled exposure cycles.

In most cases UVC solutions can vastly reduce the bioburden with negligible effects on materials and processes and minimal risk to samples or personnel. By maintaining consistently low microbial loads, such UVC technology drives down the need for more expensive sterilization and testing, and with it the overall cost of production.

Get Started with UVC Now! 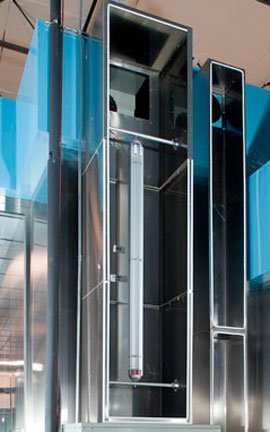