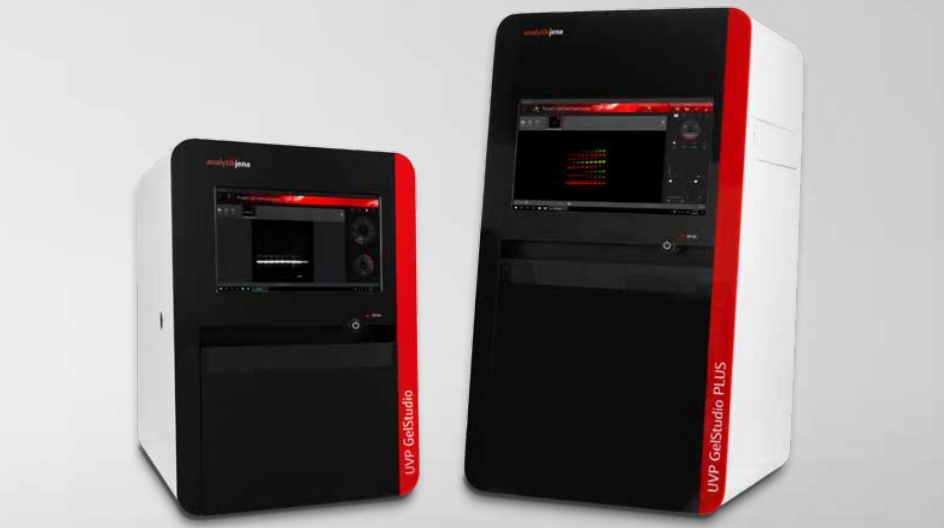 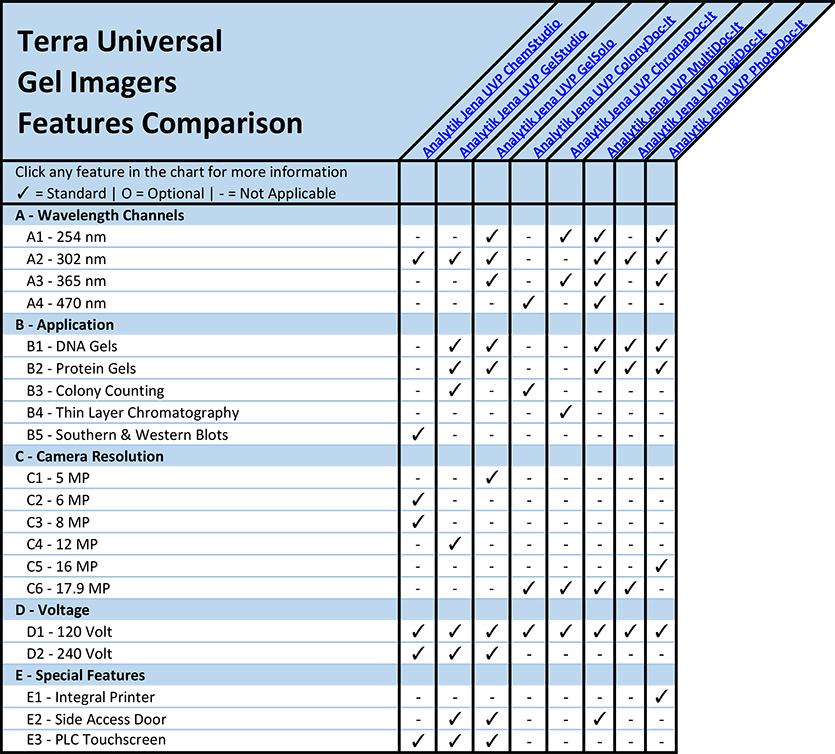 What is a Gel Imager? (Gel Documentation Systems)

How Does a Gel Imager or Gel Documentation System Work?

Gel imagers, or gel docs, contain an ultraviolet (UV) or visible (blue or white) transilluminator, a hood to block the samples from external light sources and a high-resolution camera for image capture.

The samples, loaded onto agarose gels, petri dishes or TLC films, are placed onto the transilluminator surface. After the access doors are closed to prevent operator exposure to UV light, the lamp is powered on and the samples are photo-documented through the CCD or CMOS camera. Images are saved to the onboard software system for easy retrieval or export to Microsoft Excel or LIMS.

Where Are Gel Imagers Used?

A - Gel Imager Wavelength Channels
(back to chart)

Blue light, emitted at 470 nanometers, is optimal for colony counting or viewing samples stained with commercial dyes such as SYBR Green, SYBR Gold or SYBR Safe.

B - Gel Imager Uses and Applications
(back to chart)

Nucleic acid (DNA or RNA) samples are loaded onto an agarose or acrylamide gel and exposed to an electrical field, causing the negatively-charged samples to travel down the gel toward the positive electrode. Smaller DNA or RNA fragments travel faster than longer fragments, allowing researchers to identify fragments tagged with fluorescent dyes to excise the samples for further purification. DNA gels are commonly used for PCR analysis, cloning, and next generation sequencing.

Protein samples are loaded onto a polyacrylamide gel submerged in a commercially available buffer Tris-Glycene or Tris-Acetate– Tris-Glycene or Tris-Acetate – for separation and purification. Similar to DNA gels, protein fragments of varying lengths migrate at different speeds through the gel matrix. Protein gels are used for mass spectrometry, sample denaturing, and blotting.

Colony counting is the process of determining the number of microbial colony forming units (CFUs) present within the optimal growth conditions of a petri dish loaded with cell media.

What Is A Colony Forming Unit?

Each colony forming unit represents a gross estimate of the number of homogenous, viable cells growing on the plate. Colony counting is used to detect and quantify microbes in soil, water or food samples as well as identify unique cell lines for microbial cell culture research.

Thin layer chromatography (TLC) is a research technique used to separate the components of a mixture using a thin film supported by an inert backing. As the mixture moves through the column, or stationary phase, its components will migrate at different speeds based on their affinity to the column or solvent (mobile phase). Common stationary phases include silica gel, cellulose, and aluminum oxide. Common mobile phases include methanol, acetic acid, and ethyl acetate. TLC is used to quantify and qualify many substances, including lipids, carbohydrates, fatty acids, and pesticides.

B5 - Southern and Western Blot Gel

Gel imagers with cameras include CCD or CMOS cameras with resolutions from 5 megapixels to 17.9 megapixels. The megapixel number represents the quantity of individual points within an image. A camera with a higher pixel count produces images with higher resolution, greater sensitivity, and better image clarity.

120-volt connections are suitable for standard laboratory power outlets in the United States.

Analytik Jena’s GelStudio, GelSolo and MultiDoc-It imagers include side access doors for convenient loading and unloading of gels or culture plates.

Analytik Jena’s ChemStudio, GelStudio and GelSolo imagers include integrated color touchscreens for filter and illumination control. Templates and macros, within the onboard software system, are programmable to support customized workflows.

Where Can I Buy Laboratory Gel Imagers Online?

Contact a Laboratory-equipment.com specialist through web chat, email, or phone for pricing or a same-day quote.