Terra Universal is the leading expert in the design and fabrication of critical-environment applications. We offer a complete range of equipment, furnishing and supplies for cleanrooms and laboratories. The following are the rigorous standards to which Terra Universal adheres.

Before global cleanroom classifications and standards were adopted by the International Standards Organization (ISO), the U.S. General Service Administration’s standards (known as FS209E) were applied virtually worldwide. However, as the need for international standards grew, the ISO established a technical committee and several working groups to delineate its own set of standards.

FS209E contains six classes, while the ISO 14644-1 classification system adds two cleaner standards and one dirtier standard (see chart below). The "cleanest" cleanroom in FS209E is referred to as Class 1; the "dirtiest" cleanroom is a class 100,000. ISO cleanroom classifications are rated according to how much particulate of specific sizes exist per cubic meter (see second chart). The "cleanest" cleanroom is a class 1 and the "dirtiest" a class 9. ISO class 3 is approximately equal to FS209E class 1, while ISO class 8 approximately equals FS209E class 100,000.

In November 2001, Federal Standard 209E was superseded by the new ISO 14644-1 international standards. References to FS209E are still used; the comparison chart below illustrates the relationship between the two standards.

Terra cleanroom walls are made of durable, easy-to-clean, ISO-grade materials, as specified in FDA guidance documents. Combined with your cGMP processes, they will help you comply with operational requirements. 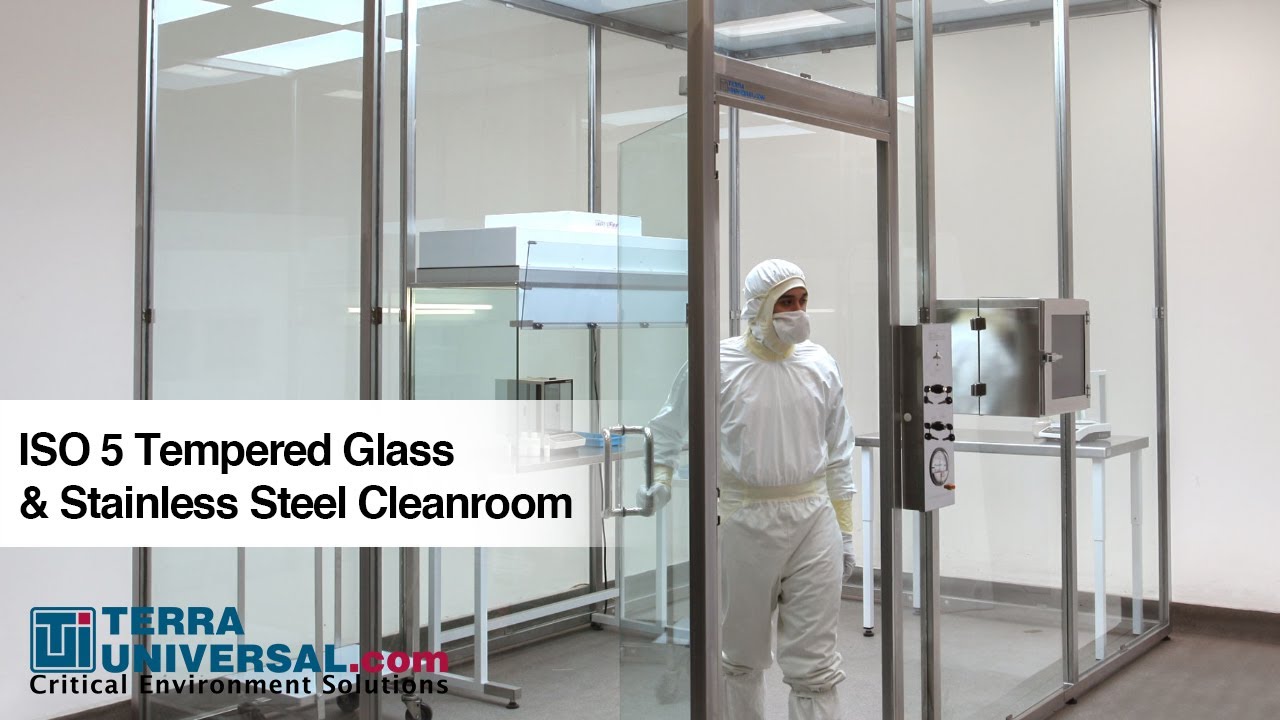 In cleanrooms, particulate concentration changes over time — from the construction and installation of equipment to its operational status. ISO delineates three cleanroom classification standards: as-built, at-rest and operational. Read more about cleanrooms and gowning room design considerations/recommendations. As instruments and equipment are introduced and particulates rise, an "as-built" cleanroom becomes an "at-rest" cleanroom. When people are added to the matrix, particulate levels rise still further in the "operational" cleanroom.

A Guide to Gowning Procedures 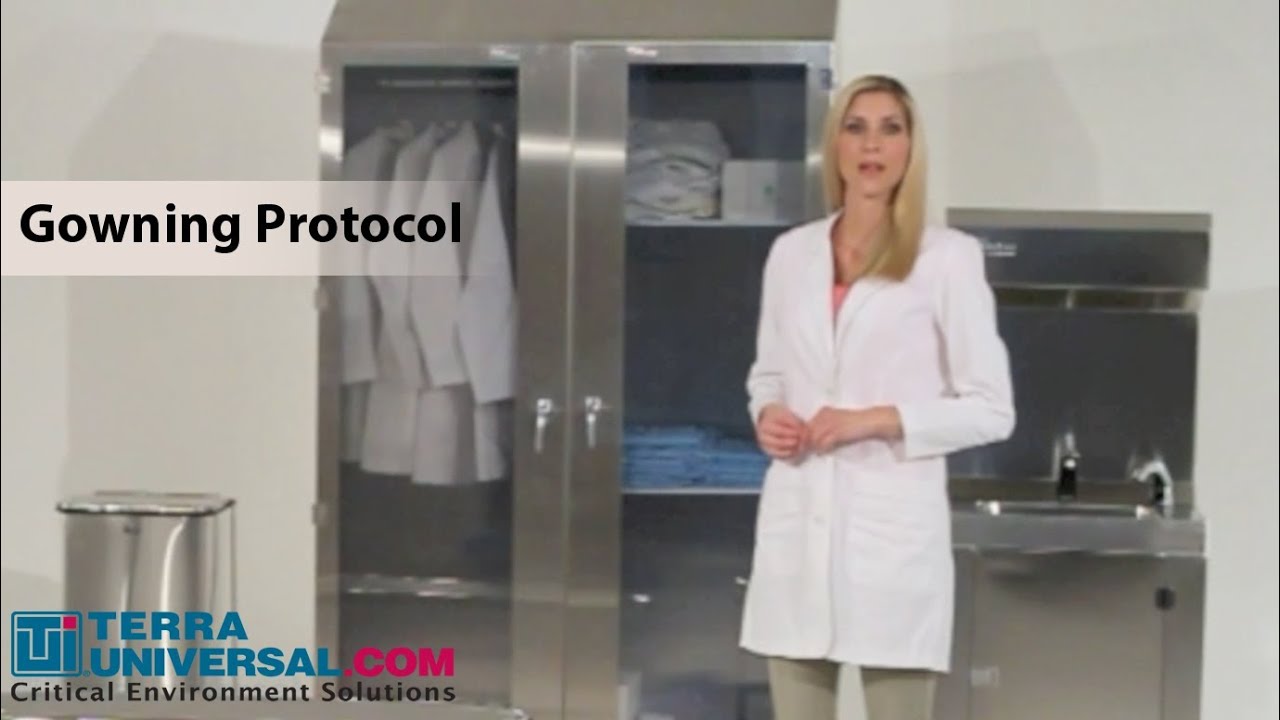 ISO 14644-2 describes the type and frequency of testing required to conform to certain standards. The following tables indicate mandatory and optional tests.

In addition to ISO 14644-1 and ISO 14644-2, eight other cleanroom standards documents exist, as well as three specific to biocomtamination applications.


The source for FS209E documents at the General Services Administration is:

A critical factor in cleanroom design is controlling air-change per hour (ACH), also known as the air-change rate, or ACR. This refers to the number of times each hour that filtered outside air replaces the existing volume in a building or chamber. In a normal home, an air-conditioner changes room air 0.5 to 2 times per hour. In a cleanroom, depending on classification and usage, air change occurs anywhere from 10 to more than 600 times an hour.

ACR is a prime variable in determining ISO and Federal cleanliness standards. To meet optimal standards, ACR must be painstakingly measured and controlled. And there is some controversy. In an appendix to its ISO 14644-1 cleanliness standard, the International Standards Organization addressed applications for microelectronic facilities only. (ISO classes 6 to 8; Federal Standards 1,000, 10,000 and 100,000.) The appendix contained no ACR standards for pharmaceutical, healthcare or biotech applications, which may require higher ACR regulations.

According to current research, case studies and experiments, using an ACR range (rather than one set standard) is a better guideline for cleanliness classification. This is true because the optimal ACR varies from cleanroom to cleanroom, depending on factors such as internal equipment, staffing and operational purpose. Everything depends on the level of outside contaminants trying to enter the facility versus the level of contaminants being generated on the inside.

The breadth of these ranges reflects how dramatically people and processes affect cleanliness. Low-end figures within each contamination class generally indicate air velocity and air change requirements for an as-built or at-rest facility—where no people are present and no contaminating processes under way. When there are people and processes producing contaminants, more air changes are required to maintain optimal cleanliness standards. For instance, some manufacturers insist on as many as 720 air changes per hour to meet Class 10 standards.

Determining the appropriate number of air changes for a particular application requires careful evaluation of factors such as the number of personnel, effectiveness of garbing protocol, frequency of access, and cleanliness of process equipment. Learn more about fan/filter units and see the models offered by Terra, such as room-side replaceable, ducted and energy-efficient.

Jaisinghani’s recommendations concur with other recent studies of ACR, which criticize some existing air rate standards (developed in the 1990s) as being unscientific because they are based on fans and filters inferior to today’s models. So when these older standards are applied, the resulting ACR is often too high. In fact, some studies have found that reducing the ACR (and its attendant air turbulence) can result in a cleaner atmosphere.

This was demonstrated in a study conducted by Pacific Gas and Electric (San Francisco) and the Lawrence Berkeley National Laboratory (Berkeley). The study measured air change rates in several ISO Class-5 cleanrooms and came to the conclusion that there is "no consistent design strategy for air change rate, even for cleanrooms of the same cleanliness classification."

The study focused on Class-5 cleanrooms, concluding that an ACR range of from 250 to 700 air changes per hour is standard, but that "actual operating ACRs ranged from 90 to 625." It added that all of these optimized cleanrooms were certified and performing at ISO Class-5 conditions with these lower ACRs. Finally, the study concluded that rarely does a Class-5 facility require an ACR of more than 300.

The study also found that the "[b]est practice for ACRs is to design new facilities at the lower end of the recommended ACR range," with variable speed drives (VSDs) built in so that air flow adjustments can be made under actual operating conditions. Control can be performed manually or automatically. See the Smart modular cleanroom control systems offered by Terra.

In his report "An examination of ACRs: An opportunity to reduce energy and construction costs," Peter Rumsey, PE, CEM, essentially concurred with the PG&E-commissioned study by Berkeley. Rumsey issued a caveat, then brushed it aside by citing research subsequent to Berkeley’s: "Air cleanliness is a critical component of any cleanroom, far outweighing energy saving priorities. Designers and operators need evidence from others who have tried similar strategies in order to address the perceived risks of lowering air change rates."

In summary, current research and thinking on air change rates indicate that some existing standards are too high and can be lowered while still meeting all ACR criteria. Read Terra's blog post "What Makes a Room Suitable for Aseptic Proceses?"

In addition to ACR and ceiling coverage, the third factor integral to maintaining cleanliness is fan-generated air speed. Again, higher airflow velocity results in a "cleaner" cleanroom. The term "ventilation efficiency" refers to the speed of filtered air passing through the cleanroom in addition to the number of air changes per hour (ACH or ACR).

Combining all three factors—ACR, ceiling coverage and airflow velocity—results in the following table:

Before deciding on the appropriate velocity and air changes for your application, Terra Universal recommends careful evaluation of factors such as number of personnel, effectiveness of garbing protocol, access frequency and cleanliness of process equipment.

Once the required air change figure is established, the number of required FFUs can be determined using this formula: No. of FFUs = (Air Changes/Hour ÷60) x (Cubic ft. in room÷ 650*)
*CFM output of a loaded FFU

Cleanrooms are designed to maintain positive pressure, preventing "unclean" (contaminated) air from flowing inside and less-clean air from flowing into clean areas. The idea is to ensure that filtered air always flows from cleanest to less-clean spaces. In a multi-chambered cleanroom, for instance, the cleanest room is kept at the highest pressure. Pressure levels are set so that the cleanest air flows into spaces with less-clean air. Thus, multiple pressure levels may need to be maintained.

A differential air pressure of 0.03 to 0.05 inches water gauge is recommended between spaces. In order to minimize disruptions to these cascading pressures when doors are opened, air locks are often specified between rooms of differing ISO cleanliness levels. Automated fan controls simplify pressure balancing by allowing fan speed adjustments at a centralized console panel. Why is pressure differential important and how is it measured? Read Terra's "Under Pressure in Critical Environments" blog for answers.

ISO 5 (Class 100) and cleaner facilities rely on unidirectional, or laminar, airflow. Laminar airflow means that filtered air is uniformly supplied in one direction (at a fixed velocity) in parallel streams, usually vertically. Air is generally recirculated from the base of the walls back up to the filtering system.

ISO 6 (Class 1,000) and above cleanrooms generally utilize a non-unidirectional, or turbulent, airflow. This means the air is not regulated for direction and speed. The advantage of laminar over turbulent airflow is that it provides a uniform environment and prevents air pockets where contaminants might congregate. See more about the importance of airflow uniformity.